Lie detector test is a household term today. With crime rates increasing everyday and some of the crime cases going on to become national news, grabbing headlines and becoming hot topics of debate on national channels, there is hardly anyone, who have not heard this term or is unaware of it. However, what most people are still unaware of, is the fact that such tests are not only conducted by the police and government agencies, but also many private investigation agencies.
Yes, you heard that right. Many private forensic labs are now conducting these tests and an increasing number of people are taking the help of these agencies in cases of infidelity, robbery, theft etc. But before we discuss this further, let us tell you what a lie detection test actually is and how it works.

What is a lie detection test?
Polygraph is the same as a lie detector test. Polygraph is a scientific name for lie detector. Polygraph, is basically a biomedical device consisting of three parts: a digital signal converter, sensors that are attached to the person to take readings and a computer with special software designed to record and decrypt indicators. During a test the subject is asked a series of questions with sensors mounted on his body. Physiological changes are measured by the device to find out if he is speaking the truth or not. The polygraph records various body parameters like blood pressure, pulse, heart rate, respiration and and galvanic skin response (GSR) to determine if the subject is lying.
A major change in any pattern indicates that the subject is under stress and is a sign that person is not speaking the truth.


Why do people take the lie detection test?
In India, it is not very common for people to go to the police to lodge a complaint when there is a robbery in the organization. Most people are reluctant to approach the police and government agencies as they want to maintain confidentiality.
An increasing number of corporates, banks and insurance companies are taking the help of private investigation agencies to conduct lie detection tests to crack white-collar crimes. Not only organizations, but even an alarming number of individuals are approaching such private forensic labs for lie detection tests to resolve suspicions of infidelity.
Privacy and saving time are the two prime reasons why companies avoid the police. Many corporates who suspect any sort of crime in the organization do not want to go to the police because not only it is time-consuming but it also involves the risk of things going public. The growing population and over burdened police force, have led to the mushrooming of these private investigation firms who are not only filling up the gap in the market, but also helping the police concentrate on more serious crimes.

When are lie detection tests undertaken?

A polygraph test has multiple benefits. It can help to detect deception, to induce admittance of crime from the suspect if he is really involved in it and to narrow down the investigation to verify truthfulness of statements of suspects, complainants and witnesses.
Lie Detector test can be conducted on anyone who is willing to take it. A polygraph test can be done in the following cases:
Issues related to relationships and character checks- where a person suspects his spouse to be cheating on him
Screening of Employees- in case of corporate crimes
For detection and investigation of white collar crimes in Corporate like financial frauds, bungling and pilferage
Pre-Employment tests and recruitment screening
Conspiracy by trusted persons,
For detection of addictions in children
Case of thefts and stealing in offices or homes
Any other case where truth needs to be uncovered
The subject undergoing a lie-detector test has to give his consent to it beforehand and undergo a few preliminary interviews.
Though a lie detection test can be used to determine someone's innocence as well as his guilt, it is not totally foolproof. However, they have found to have a high accuracy level, as high as 95%.
In cases, where the subject is fearful, angry or nervous, the results might be affected and not reveal the truth. Also, these tests do not work on seasoned criminals and psychopaths. One should also know that lie detectors tests are not accepted as evidence in the Indian legal system. 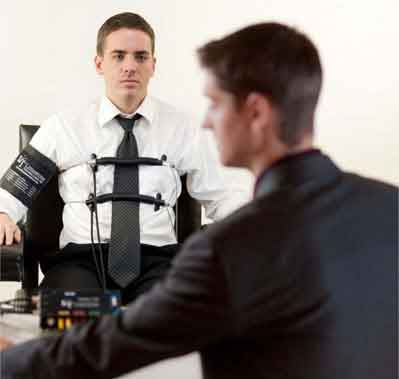 Procedure to be followed during a lie detection test
The officer conducting the polygraph test must follow the following procedure to get accurate results from the test:
1) The test should be conducted by a trained psychologist with criminology background.
2) A brief case history covering all details of the crime should be provided to the expert, in cases where crime is involved.
3) At no point should the examiner or investigating officer resort to abusing or threatening the person undergoing the test as it may affect the results.
4) The test is conducted in seclusion and no one should be allowed to enter the room where the test is conducted. The room should be sound proof and not be disturbed by mobile or any other means.

Lie Detector Test from City Intelligence
City Intelligence, an investigation agency based in Delhi, provides 100% reliable and trustworthy lie detector tests to its clients. Our team of examiners consist of highly trained people who have years of experience behind them and have been conducting such tests with utmost accuracy.
Our wealth of experience, knowledge and high level execution combined with a regulated operating framework helps us offer the best services to the utmost satisfaction of our clients. Over the years, we have served a number of clients, both corporate and individuals. We use the best and modern devices available and upgrade our technology as well as our expertise regularly, to ensure most accurate results for our clients.

The Facts You Need, When You Need Them

Hiring City Intelligence is the only call you’ll ever have to make. We guarantee the professionalism of all our staff, and pride ourselves on our reputation to deliver the best possible results for all of our Clients.

We are one of India’s established and most respected Private Investigators. With over 22 years of experience in investigations helping people resolve their problems we are here to assist in all aspects of private investigation providing a cost effective service. Our investigators are experienced, skilled and from a law enforcement background. We get results. Of course not all problems have quick and easy solutions however we will provide you with the options best suited to your situation.

"Brilliant work and the very best service I have ever had from a private investigator. The efforts expended to locate the target despite the erroneous details provided by our client, the quality of the contemporaneous notes, photos and speed of reporting and your availability and mustering of competent, professional resources is something for us all to aspire. I certainly won't use anyone else in the future"

"An experienced professional who provided an excellent service from beginning to end. Every aspect was covered from planning and execution to the legal paperwork and support required to ensure a successful conclusion with the least amount of stress and fuss."